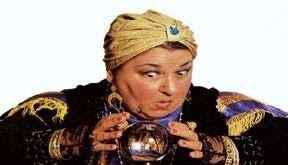 ARIES (March 21-April 19): The revolution of Jupiter over the second ring of Saturn confirms that you will receive the ability to breathe underwater. When you use your powers, you will find an underwater city inhabited by creatures that scarily resemble Jar Jar Binks. After much deliberation, they will accept you as one of their own

TAURUS (April 20-May 20): You never thought somebody could steal your heart while preparing to rip it from your chest cavity, but here comes that dreamy cardiothoracic surgeon with a fresh scalpel.

GEMINI (May 21-June 20): You will wake up in a daze surrounded by your ex-girlfriend, your current girlfriend, your second least favorite co-worker Jim, Steve Buscemi, Paul Ryan, and T-Pain. The perfect storm!

CANCER (June 21-July 22): You win a sweepstake for an all-expenses-paid trip to Hawaii through United Airlines! Upon taking your seat on the plane, a flight attendant accuses you of using fake plane tickets, and knocks you out stone cold. The rest of the crew follows suit, and slowly drags you off the plane. You wake up in United’s Public Resources office, where everyone begins flipping desks.

LEO (July 23-Aug. 22): You will be admitted into the university of your dreams, only to realize that the admittance paper belongs to your secret identical twin with the same name. After seeing his attached student loan bill, you faint out of despair.

VIRGO (Aug. 23-Sept. 22): You will finally work up the courage to ask that special someone to prom. They will accept, but on the night of prom they will show up with their 5-year-old sister, saying they have to babysit to pay off their suit. You will get up on the stage, push off the DJ, and put on a puppet show that will make everyone at prom go wild!

LIBRA (Sept. 23-Oct. 22): A Nigerian man will email you letting you know that you have inherited 10 million dollars from his country’s prince. You receive the money as promised, only to have 99.99% of it taken from you by the government through their sneaky ‘inheritance tax’.

SCORPIO (Oct. 23-Nov. 21): You will be bitten by a poisonous snake while touring the Himalayan Mountains. Just as soon as you accept your fate, a tall, strong figure in all white clothing picks you up and carries you down to base camp. You will wake up in a spotlessly clean room with your wounds still unattended to, and notice your savior has a bald, shiny head and one earring. You die two weeks later of an infection. Thanks, Mr. Clean!

SAGITTARIUS (Nov. 22-Dec. 21): A corpulent man in a wizard’s robe offers you a magical spinning discus that will bring you clarity and infinite wisdom, in exchange for two years of your life, but you’ve been scammed! He instead gives you a single fidget spinner and vanishes in a cloud of smoke. On the bright side, fidget spinners are all the rage among the cool kids nowadays.

CAPRICORN (Dec. 22-Jan. 19): You will start a CapriSun™ infused corn farm named CapriCorn, and make tens of dollars. After being sued by CapriSun™ for copyright infringement, you will fight their lawyer, Jeffrey Beauregard Sessions in a to-the-death cage match. You win, but only because you fought dirty.

AQUARIUS (Jan. 20-Feb. 18): You’re debating breaking up with your girlfriend, but her pet parrot has dirt on you that you’d like to keep under wraps. Some people may not understand your collection of 1961 bubblecut barbies. They were modeled after first lady Jackie Kennedy, and only you know how special and enchanting they are. –

PISCES (Feb. 19-March 20): A light bulb goes off in your head in the middle of Chem class, and you think of an amazing course to add to the English department’s curriculum, called “Shampoo Bottle Labels as Literature.” It will consist of shampoo and conditioner texts central to Western hygiene from antiquity to the modern age, examined froma variety of critical and theoretical standpoints. Texts will include Olay, L’Oreal, Finesse, Pantene, Pert Plus, Pert Minus (not quite a shampoo, not quite a conditioner), and excerpts from Head and Shoulders. Topics will include moisturizing motifs and the use of “Now Sulfate-Free!” as symbolism. Students will write three short papers and keep one “hair journal.”